Questions on the Moscow Superjet crash 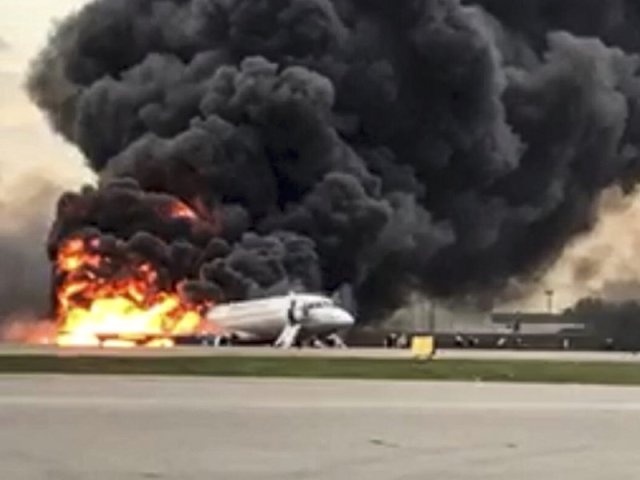 On May 5, 2019, an Aeroflot Sukhoi Superjet 100-95 crashed when returning to land at the Moscow Shremetyveo airport.  Of the 76 passengers, 41 were killed in the accident.  On departure the flight encountered an area of convective weather. It has been reported that the aircraft encountered “static discharge” while climbing through 2100 meters (6,900 feet).  A static discharge is not uncommon.  Aircraft build up an electrical charge in the vicinity of convective weather. They are equipped with “static wicks” to discharge this, however, if the building up is strong enough a large discharge, resembling a bolt of lightning, can come off the aircraft structure.  Usually this does little more than a loud bang and, perhaps, a small burn spot on somewhere on the airplane. It can be scary, but not a problem.  However, more rarely, it can lead to an electrical problem, and this occurred in this case.

The Superjet is equipped with fly-by-wire flight controls which filter the pilot commands through a computer.  To understand this, it is first necessary to understand that all airplanes are designed to be relatively stable. Without any controls the airplane is designed to maintain its path, not suddenly pitch up or down, nor should it particularly roll left or right.  Like a model airplane it just continues along if not disturbed.  The pilot uses controls to make changes, but because of the inherent stability of the airplane the workload is not too high as only small corrections are needed most of the time. In the most basic airplanes the pilot commands are connected directly to the flight control surfaces via control rods or cables.  As a result the pilot has direct feedback to changes.  Faster speeds mean that the controls are moving against winds, and so the controls are naturally harder to move.  This feedback to the pilot is important because larger control movements at high speeds can be dangerous.  In larger airplanes the pilot controls are connected (generally via cable) to hydraulic actuators which in turn move the control surfaces. This already creates a problem as the pilot has been removed from direct feedback from the controls.

To compensate for this the designers put in “artificial feel”, which utilizes airspeed (measured through pitot tubes just like the airspeed indicators, but usually independent) to make the pilot controls feel heavier for the pilot as the airplane flies faster, and lighter as they fly slower.  Many newer airplanes have fly-by-wire flight controls.  Here the pilot controls are sent to a computer and the computer than commands the hydraulic or electric actuators to move the control surfaces.  With the addition of computers we can now add features that were not possible before.  We can make the aircraft design more efficient.  Stability in the design can be reduced as the computers can compensate. This is helpful because some of the features that increase stability also reduce fuel efficiency.  We can also ensure that the airplane always handles the same way.

Before fly-by-wire the pilot had to manage differences in airplane response.  If the airplane was loaded more nose-heavy or tail-heavy the response changes.  The same with altitude changes, weight changes, and moving flaps or landing gear as well as the changes when the airplane nears the ground known as “ground effect”.  The pilot learns to adapt to these changes and compensate. With fly-by-wire none of that is necessary.  A Boeing 777, for example, is very easy to fly as the airplane always responds the same way to the same pilot control input. No longer does the pilot have to adjust their forces depending on the various factors listed above.  It is all very easy – as long as it is all working. In the event that the system does not have the information it needs to control the airplane, all fly-by-wire systems “degrade” to something less.  The most basic level is “direct law”, in which case the airplane controls act much like a non-fly-by-wire airplane.  It is quite different, and in some cases, dramatically different.

For the Superjet pilots this apparently became a factor.  The electrical problems led to a loss of many aircraft functions. The pilots lost their primary radios and the fly-by-wire flight controls degraded to “direct mode”.  While this is a flyable mode, the airplane handles quite differently.  Airlines generally provide little to no training on this.  The training generally consists of the pilots managing it temporarily, then restoring electrical power and full flight control capability prior to landing.  However, in this case the flight controls remained in this mode, and the captain of the flight had to do something that is extremely rare outside of the world of test pilots.  He had to land the airplane in direct mode.  We are not aware of any other case of this occurring in the history of commercial aviation.  The pilot would likely not have been trained for this, so would now be managing a situation entirely outside of what was envisioned by the designers or the airline training department.  Predictably, the pilots are once again the focus of this accident, including stating that they should have waited and dumped fuel. We have questions that should be answered prior to blaming the pilots:

It is all too easy to blame the pilots.  However, to prevent a future accident we must look more deeply.

1 Response to Questions on the Moscow Superjet crash