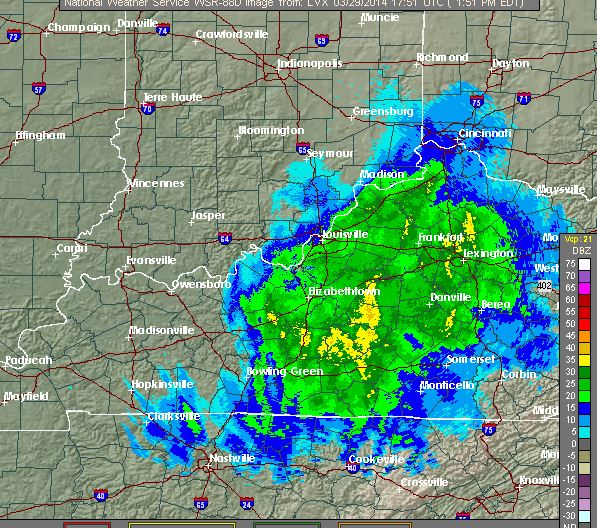 “Flight 1210, I am currently depicting an area of extreme precipitation from your 10 o’clock to 2 o’clock approximately 40 miles in front of you”.  We were enroute from TPA to MEM at FL380.  Our radar was set to about 2 degrees down, and we were showing absolutely nothing on the radar.  Suspecting snow, I turned the radar’s gain all the way to maximum, and at that setting, a few scattered green (lowest level of intensity) very small dots (more like pin-points) appeared in the general area where the controller said he was depicting weather.  Why such a difference?

When pilots ask for more information, we are often met with a response from ATC with words similar to “Your weather depiction on your radar is better than mine”.   The statement highlights the following fact: Many pilots and many controllers do not fully understand each other’s capabilities. So, who does have the better display? The answer is “it depends”.  First, a caveat. Aircraft have a wide variety of equipment. Many non-airline aircraft have various uplinked weather products.  Few (if any) U.S. airline aircraft have more than airborne weather radar.  As this article concerns U.S. air carriers, we will not discuss those tools that may be available to corporate and general aviation aircraft. Airline aircraft use x-band radar, which is very good for getting sharp definition of wet rain, but attenuates very easily and is virtually unable to get a return on a dry particle (snow or hail).  It is also low power.

Unlike the radar that ATC uses, which has a peak power output in the 25kw range, the modern airborne weather radar units only have a maximum output of 150 watts. Yes, you read that right.  They put out less energy than some of the light bulbs likely installed in your house!  They make up for that by having very sensitive receiving antennae and good processing computers.  Still, that small amount of power only can go so far – is it any surprise that it cannot pass very far through a band of weather? This capability is even worse when we are flying in the precipitation itself.  The rain coats the radome and greatly reduces the ability for the airborne weather radar to “see” what is happening.  Couple that with the attenuation once the beam leaves the aircraft and it is attempting to pass through a wall of water.

Flying in the precipitation, sometimes all we see is an arc of red extending only a few miles in front of the aircraft.  During these times, what is interesting, is that the most intense storms will actually attenuate the radar even more, and depict as a thinner spot, with a “bow” inward in the depicted arc.  If the pilot is not sharp, what it looks like is that the fastest way out of the weather is to turn towards that bowed in area.

On April 4, 1977, Southern Airways 242, a DC-9, was sucked into such a trap.  Attempting to find a way through severe weather, they turned towards that bow like a moth to a light.   They flew into the jaws of a Level 5 thunderstorm, crashing a short time later after both engines flamed out in the heavy rain and hail. Contrast this against the WARP (Weather Radar and Processing Unit) on the ARTCC displays.  The higher power, multiple sites and integrated NEXRAD entirely eliminate the attenuation issue for all practical purposes.  Although the display can be a few minutes old due to the processing time, it is very valid information.

Further,  as controller’s know, the ARTCC display can be selected to change the base altitude from the surface, FL240 or FL 330.  This is important.  Storms with vertical development can be analyzed this way to get some idea of what is being looked at.  Remember my story earlier about not depicting anything while ATC was showing an area of intense precipitation?  I asked the controller what altitudes he had selected.  He was showing weather FL 330 and above.  Most precipitation at that altitude will be frozen.  So, why could I not see it on the airborne unit?  The reason is that it was snow.

The ARTCC display shows dry precipitation — well, at least it does so a whole lot better than most airborne radar systems.  This means that a controller can potentially know where the thunderstorms really are.  If there is a wide area of rain, with some thunderstorms popping out of it, by displaying the higher altitudes, the actual individual storms can be depicted.  As most of the precipitation at that altitude is likely snow, the airborne system is very limited in what it will display.

So, when is the airborne system better?  Well, if we are out in the clear, we can tilt to remove the lower altitude stuff and differentiate that way, looking at the FL250 range to try to find the part of the storm that is not just frozen precipitation. We can also adjust the beam tilt to show the weather that is at our altitude, and not below it.  The other advantage is much higher definition, which, if we are clear of the storm, allows us to come much closer to the edge of the weather or thread through an area of storms.

In the end, both ATC and airborne systems have their advantages.  By letting airline crews know the altitudes and intensities you are depicting the weather, the crew will be in a lot better position when making safety critical decisions in the enroute environment. A similar difference exists in the terminal environment, but for different reasons.  Not only is the airborne radar system subject to attenuation, but it is also limited by tilt.  Airborne radar on airline aircraft send out a beam that is approximately 3.5 degrees wide.  It sweeps to the left and right, usually about 45 degrees to each side.  The pilot can adjust the tilt of the beam from 15 degrees down to 15 degrees up.

Using trigonometry, for every 1 degree of tilt change, the beam is moving 1,000 feet at a range of 10 miles from the aircraft.  This means that at 20 miles the beam is moved 2,000 feet, and at 5 miles it is moving just 500 feet per degree. Using the same formula, we find that 15 degrees nose up tilt will put the beam at 15,000 feet at the 10 mile range, and 7,500 feet at the 5 mile range.  This means that the ability for an aircraft to depict whether the rain is a thunderstorm and differentiate that from just low altitude rain is very limited for close-in weather when the aircraft is on the ground, or close to the airport.

Unlike the aircraft, ATC radar is not tilt limited, so ATC has a much better depiction of weather that is close in to the aircraft.  Just something to keep in mind.  On August 2, 1985, Delta 191 approached the DFW area[i].  The ATIS described the weather as benign, scattered clouds at 6,000’, 10 miles visibility and calm wind.  There were scattered thunderstorms in the area, and the flight made a few diversions inbound.  At 1756 CDT, ATC transmitted that “…there’s a little rainshower just north of the airport…”.

This was a storm that was developing significant weather at higher altitudes, which, once reaching critical mass, would essentially dump the rain downward, along with the significant wind, which would doom this flight.  1800 CDT, and 5,000’, the flight was about 20 miles from the airport.  If, like many crews, they had their radar tilt at around 5˚ nose up, they would be viewing weather at around the 15,000 foot range.  As they got closer their view would have been of the 5,000 to 8,000 foot range.  It is probable that this was not high enough to detect the severity of the storm at that time, with the radar “under-scanning” the most intense part of the water column.

There is no doubt that a good air traffic controller can bring a lot to the table in improving flight safety, and, as been highlighted in this article, ATC has capabilities that pilots do not have access to.  There is also an aspect to consider that is not related directly to the equipment.  Pilots, being human, can get caught in something called “plan continuation bias”, where the mindset of continuing is strong enough that they discard any information that goes against the plan.  ATC can sometimes be in a better “big picture” position, and by providing more accurate information regarding the physical nature of the storms, may be able to break through that bias.   Sometimes a query is all that is needed to prevent a deadly dynamic.